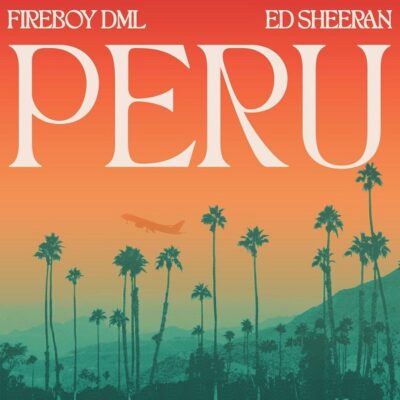 As promised, Fireboy DML has at last released the new remix to his previously heard single, ‘Peru‘, which he features Ed Sheeran.

The YBNL Nation award-winning singer, Fireboy DML reunite with the English singer and songwriter, Ed Sheeran as they combine efforts to produce this new version of ‘Peru,’ acquiring production assistance from Shizzi.

As you may recall, few days back in an interview with the English singer and pianist, John Elton, Ed Sheeran revealed that Fireboy’s management has already reached out to him, saying the singer would love to have, Ed Sheeran on the remix version.
According to him, he is aware that Fireboy’s “Peru” jam has already made a hit in Nigeria and Ghana, hence the song is very addictive and he is obsessed with the song, adding that he has agreed on collaborating with him on the remix.

Furthermore, The original song ‘Peru’ was released on July 22nd, 2021 after his recent video release for “Airplane Mode” of his “Apollo” album. And ever since the release, it has been trending and hitting many billboard charts and getting Covers from major artiste in the game.

In conclusion, the Afro-Pop record was produced by Shizzi.

I’m in West London this evening

Giving me feelings, no I’m not leaving

You’ll glow, and I’ll get lost here in your eyes

Omoge no be so

Girl you just capture my soul

Omoge no be so

Umu Obiligbo ft. Rudeboy – Not for Everybody