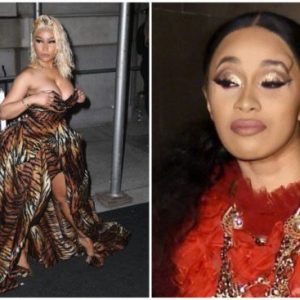 A major fight between popular American rappers; Cardi B and Nicki Minaj broke out on Friday night at New York Fashion Week.

The fight started over comments from Nicki Minaj’s camp about Cardi B’s daughter.

The pair, decked in posh frocks, were walking off the red carpet when they came at each other with blows as Cardi threw her shoe at Nicki.

“It was bad, they were separated by security, but Cardi was still trying to get at her.

“She took of a giant red shoe and threw it at Nicki — who was being blocked up against a wall by a huge security guard,” Sun Uk reported.

They were both separated by Security agents as Cardi B left with a giant lump on her head from the clash.