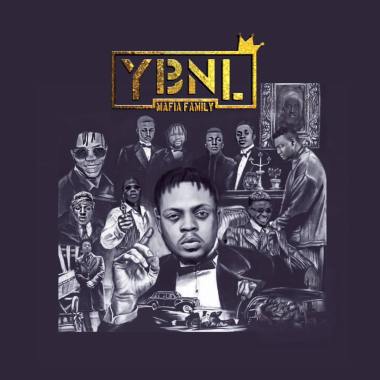 The Nigerian rapstar Olamide and his YBNL crew teams together with his new signees have decided not to end 2018 without dropping the highly waited album. The ‘YBNL Mafia Family’, it sounds, was on air on 14th December 2018.

YBNL Mafia Family comprise 13 tracks, which among the 13 songs one must be the “Indomie” you will “swallow” else you want “Omoge macaroni”. The album altogether has 14 stars with artists like Kranium, Kizz Daniel, Lil Kesh, Limerick and the new YBNL teams of Yomi Blaze, Picazo and Fireboy.

Except for three songs, the entire album was produced by the YBNL producer, Pheelzonthebeat. He delivered on all fronts and provided both animated. And soft instruments to highlight the new and old sounds of YBNL.

“I am proud to say so” that Olamide still one of the best Nigeria rapstar. Though with a unique voice that was virtually created for big hooks, Fireboy attracts us throughout this album. Picazo, who is striving for talent and personality, has authenticity shines through the viral macaroni and Fire Down. Lil Kesh has not been left out, he was deep down the sea this year. Yomi Blaze, hardcore Yoruba rapper is a breath of fresh air. He is a real rapper. “Just like that?” yes! And “If I lie, make water carry me”, said Limerick

(1) Motigbana – The pre-published anthem, accompanied by a unique dance style, is a record that you can not stop savouring every time it appears.

(2) Poverty Die – The only other pre-published album that makes the album one of the best, is the prayer-based gyration seal, “Poverty Die” and must die this year.

(3) Welcome – It was important that Olamide take the lead. It was the first time that a number of acts had been tested for the weight of a complete job, and Olamide understood the need to help them through the doors of the industry. ‘Welcome’ is all you expect from an Olamide record in 2018. A bouncy flutter, a groovy stream and him singing about money and his lifestyle. While the worms are pretty good, the hook is a bit difficult but it doesn’t lessen this from being a bop heavy record and I can already vision it burning up the dancefloors.

(4) Oke Suna – The drums that open this song is why the Yoruba parties are the best. Olamide sings, it’s a real Fuji atmosphere. The new hymn of the party has been delivered and it only continues where it stopped during the first song. Pheelz shows his crazy skills here and I really appreciate him.

If you’re not indomie, listen to the album

(5) Macaroni – This is where the action starts right with the new boys while Picazo enters. The rapper who has high expectations on his young shoulders after his viral freestyle takes the lead here.

(6) Jealous – One of the same melodic songs, someone sings and it sounds divine. There is a little Wizkid influence in that, but it seems more innocent, more enchanting.

(7) Ika – Yomi Blaze’s version of the track is quite frank and striking, because it inserts into the text of any person anxious to listen, that he is quite “naughty” behind the microphone. Another young rapper signed just a day after his friend Picazo Rhap joined the team.

(8) Send Her Money – It’s a hit of a Samba beat. Olamide sings like a drunken Mexican. Invited verses help make this pleasant, Lk Kuddy’s appears on his verse, Kizz Daniel’s distinct style shines through and Kranium also complements it very well. The coupling is good enough.

Listen to the album again

(9) I will Be Fine – One needs to recall him because he seems to exist in another universe compared to the other members of the label and the first lines already sound better than what he had even proposed for his first song.

(10) Fire Down – it’s Fire Boy again! He is hitting the hit again; this song is already a firecracker and I barely listened to it until a full minute. Picazo comes with this “Durosoke” stream, because it creates a moderate contrast with his style on his first outing. But Fire Boy steals the show again as he orders the girl to go ahead and “Fire Down”.

(11) Le Le Yi – Nice to see Lil Kesh on this album. The former YBNL member witnessed some form of rebirth, especially in the latter stages of the year, and it is comforting to see an artist who has left a label that is still associated with him. The beat sounds like something that Pheelz has spread on some of his past songs, Lil Kesh adds extra weight to the light presence of Fire Boy, while the duo produces a record that has what it takes to become a hymn of street.

(12) Lie – Rapstar Limerick is among rappers who made it by a hit of his songs. His first track “Pesin” makes wave and drives crazy. The rapstar knows how to weave his lyrics and understands the trap of music production. He talks about events, alternating between serious and playful, and Olamide relegating himself at short notice adds to make Limerick the true star here. It’s really catchy.

(13) Finally – Finally, and it’s the final in the list of the album. Temmie takes her time and is brilliantly associated with Fire Boy, who shows her charming voice in this love story. It’s good enough, I like its complementarity. The tone of their individual voices is not confused and accumulates to leave sound that will bring down your blood pressure.

Everyone is expecting the name of Picazo Rhap and Yomi Blaze to appear on the album. Fire Boy is the jewel that makes the headlines. He has the potential to do the same like his ‘F-boss’ Adekunle Gold, if the trait is maintained. The album began as a burning house with traffic jams, but disappeared halfway, managing to come to life in an instant. It would have been nice to hear songs like Picazo, Limerick and Yomi Blaze. The film is divided between Olamide, the rap master and young talents such as Fireboy and Temmie, who bring a melody and a softer side to the aggression of Picazo and Yomi.

The “Mafia of the YBNL family” is another album created from the new and valuable Olamide’s address. A project full of festive hymns, Fuji’s great influence and a central narrative just to make you whirl waist. With such a mentality, there will surely be a lot of success, but also gaps in their harmony and cohesion.

This album is a good way to introduce his artists and, although he does not offer enough conclusions to draw conclusions about their skills, he gives an attractive idea of how the YBNL family will occupy the industry for years to come.

We are rating from the scale 0-5

If you missed the album, get it here – YBNL Mafia Family