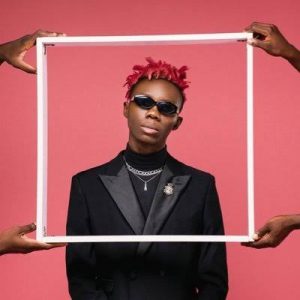 The rapper signed to Warner Music Group African’s imprint ‘100 crowns’ is the reason behind the new buzz in Nigerians rap game.

Hip pop in Nigeria has been dead as proclaimed by Chocolate City’s boss M.I Abaga in his 2017 single “ You Rappers Should Fix Up Your Life”. Two years afterwards, with two massive hit singles, Blaqbonez is on the verge of leading the Hip Pop industry for the younger generation.

With the Martell cypher 2 and the 2019 Hennessey cypher, a serious beef was initiated in the Nigerian hip pop industry. This was after Blaqbonez literally called out all rap acts in the industry with his “Best Rapper in Africa” single.

MI and Vector got into this huge beef, throwing shots at each others team and diss tracks afterwards. The whole beef sparked up so much. The media attention was amazing. Several people joined the diss game including blaqbonez’s boss A-Q.

While these happened, so many forgot the youngster that stuck to rap, and initiated the buzz in the first place. Blaqbonez became the first rap act to amass over 40,000 views in a hip pop track audio on YouTube in 2019. He did not just resurrect hip pop, he made it bankable again.

Chukwu-Emeka also known as Blaqbonez is currently at work on a new EP, “Mr. Boombastic,” scheduled to drop in October. It will introduce a hyper-hedonistic alter ego and draw from Caribbean-influenced sounds.

On the 29th of August 2019, his successes was featured on New York Times making him one of the acts to look out for in Nigeria.

What do you think? Drop comments below