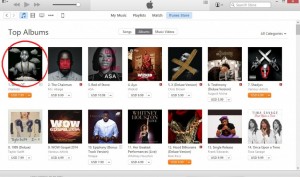 Less than a few hours to the official release of Olamide’s fourth studio album #StreetOT , it already peaks at the number one spot (displacing M.I’s The Chairman) on iTunes chart for top albums in the world. Can you beat that?

Mind you, this album is still in pre-order. The feats this singular album has attained since the news of it’s coming filtered in, has not only surpassed but equally scaled on so many humbling, yet-s0-impressive levels.

Up In The Club featuring YBNL’s Viktoh, still remains the only full track (lead single) off the album that we’ve heard. And then not long ago, we watched Don Jazzy talk about working with Olamide on Skelemba.

This further attests to whatever motives Olamide has employed to bag the title of the most consistent artiste in Nigeria, even endorsed by his fellow artistes. Thus, you can’t afford to be sleeping while another one of our own makes world history.

Make sure you grab a fresh hot copy that very moment it drops!

JeriQ – Back To Basics