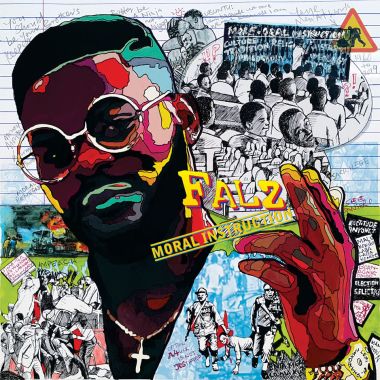 “Anything I talk make you talk am again Eh eh talk am again,” said by Folarin Falana aka Falz on his recently dropped track called ‘talk’.

Falz has shown his brevity on this type of musical activism, with many of his songs, including “Child of the World“, which deals with sexual abuse. Then ‘This is Nigeria’ (which of course has generated an invisible legal action from the MURIC (Muslim Rights Concern) organization) and the present eulogy of the moment – Talk.

It is amazing that the total duration of the songs does not exceed 25 minutes. Yet, it raised critical issues that took several pages of books from separate authors on the Nigerian subject.

In the few minutes of work, Falz raises the following problem: it would require several articles of opinion journalist to do the same. It’s the power of the musician to be able to do so much with so little time. It is not surprising that Fela described music as the weapon of the future.

The song follows the talk-talk chorus style of Fela. “Anything I talk make you talk am again” is similar to the way Fela asked the audience to make a call-answer by repeating some words to sing with the song. This style is about participation and mass involvement in the denunciation of the national condition.

At the beginning of the song, Falz continues the controversy of religious experts on his use of the hijab to reflect the situation of the ladies captured by Boko Haram. He launches the first ‘yab’ of the song at MURIC, wondering why they did not appear in court despite the threats and the noise on the media. He refers to the elections on the next line and declares: “election don dey come dem go need your support”. The campaigns for the 2019 election are in full swing and we understand that this is a warning against electoral violence. “Dem go needs your support. (Do you want to offer it?)” He introduces the electoral aspect very early because the rest of the complaints of the song can be treated by voting the right people in the elections.

Falz goes on to the question of yahoo boys. Falz has talked a lot about Internet fraud. He again refers to the recent arrest of alleged yahoo boys in a popular club in Lagos. “Since EFCC bust in, we no Dey see you for club. And you get legit work Na wetin you talk”. The threat has become widespread in recent times with increased crime to go with it.

On “4 year tenure, 3 year holiday”, This is an obvious reference to medical tourism that has continued in Nigeria with several politicians who have left the country for medical treatment and for other reasons that remain secret. This threat has been condemned in the song within that line. “Our senator don dey fight Kung Fu again. Shey dem never tire dem wan continue the race?”, These lines reflect the transformation of the National Assembly of Nigeria into a battleground. He then passes a subtle pass to the presidency, asking if at his current age, he is not tired to continue the race. “We buy your story but you no give us change”, is a subtle pass to the APC which is the party in power. Having received their mandate, the slogan “change” of their campaign is invisible.

Falz has not left any stone unturned in Nigeria present conditions. Adding that “Month don end Oga pay salary. In 2019, 19800 alawe. Instead make you talk you dey find Alhaji”, he mentions here the conflict of the minimum wage and the fact that the workers were not paid in several states despite their work. For some, they still receive modulated wages. He also lends his voice to the increase in the minimum wage and says it is appropriate for 2019. He also denounces the sex trade in women, an area in which he has often been interested in other songs like Child of the World.

In the first title, he tells a story about Johnny, victim of police brutality, while denigrating the trigger of police in Nigeria. He uses an impressive typing line here, “They kill am for Jos for no Just Cause”. He also speaks briefly about the evils and nonsense of tribal wars, happening in Nigeria without much effort from security operatives.

The topics discussed here are mainly materialism and greed, explaining the mentality of Nigerians and the attitude “at any cost” vis-à-vis the acquisition of wealth, while tasting Fela Kuti brilliantly.

In Hypocrite, he addresses men’s domestic violence, Christian hypocrisy, politicians and their pretence, emphasizes the responsibility of voters and the role of the Nigerian electorate in the misery of Nigeria.

In Amen, he samples Fela again. The track is a critical appraisal of religion and its bullshit and the double standard we see frequently. He also samples background sketches reminiscent of those of Be Free by American rapper JCole. This is among my favourite.

“Shey never chop. He has no reason to shine his white teeth. But I chop and have no problem”. He explains here the need for personal responsibility and the way Nigeria’s interconnected problems, sexual slavery and the need for selflessness. Some of the lyrics embody George Bush’s message to Americans in 2000, imploring them to “Be citizens and not spectators”. He talks about predominant things, such as health, service providers, wishing to see police reports before treating people in a medical emergency and the problems that arise.

In the track “Paper” featuring Chillz, he is launching a fierce attack against the culture of ritualism, fraud (Internet and physical), the problem of the impatience of Nigerians and critically criticizes parents who give their children in early marriage.

In this penultimate track, he again samples Fela’s aggression on Nigerian politicians, while continuing to speak against the greed of politicians and its causal link with the vices to which the desperate masses resort.

He concludes with some spoken poetry, explaining that he is neither a saint nor a moral entrepreneur, but only a concerned type. Clearly, he does not just blame without accepting any.

The track “Talk”, surely, will be relevant in several years to come. It’s a classic album. However, this work is changing the game and redefining the culture and is certainly one of the most shocking works of the last two decades.